A gaming laptop is a great way to get the best of both worlds. You can enjoy the power and performance that comes with these laptops but also use them for everyday tasks like editing videos. If you are trying to figure out if they are good for video editing, then this blog post will answer all your questions!

Can gaming laptops be used for video editing?

Gaming laptops are great for video editing because they have powerful hardware that can handle even the most demanding tasks.

The graphics cards found in gaming notebooks will help you to create your videos with a lot of detail, and there is more than enough power to make sure they run smoothly on your laptop’s display without any lag or glitches.

Gamers understand how important it is to use their machine as efficiently as possible, so many software developers try to make all games work well on both low and high-end machines if at all possible. This means that taking care of business while playing some PUBG shouldn’t slow down rendering times too much!

You’ll often find professional users recommending workstations over gaming laptops when it comes to editing video clips, but many professionals disagree with them! In truth, both machines can be good for video editing, depending on what your needs are.

Powerful gaming notebooks are more usually more than capable of handling video editing. A workstation is usually the better choice for people with specific requirements, for example, a screen with very accurate colors and a 4K resolution. The hardware needed in a video editing workstation is similar to the specs you’ll find in this article’s best laptops for drawing.

On the other hand, if you want a laptop for both gaming and video editing and are willing to sacrifice on the screen quality, getting the right gaming laptop is generally the best option. It’s important to go for whichever machine is more suitable for your specific situation.

Streaming and Broadcasting Demands For a Gaming Laptop

Streaming and broadcasting are popular activities for gamers, but they can also be used by people who want to show their games while recording.

When it comes to this type of activity, you’ll need a laptop that is reliable and has the hardware needed to both handle demanding tasks like rendering movies and playing complex games on high graphics settings without any lag or glitches.

While streaming isn’t as demanding as video editing, it still important to have the right hardware to handle recording gaming in real-time. Make sure the video editing laptop has the right processor since a too weak CPU can cause lag when streaming.

What To Look For In a Laptop for Video Editing

The most important thing for a laptop made for both gaming and video editing is the display. Of course, you’ll want one with a high refresh rate so you can enjoy fluid gameplay, but also, don’t forget about resolution! A 17-inch screen may sound like it would give you plenty of space to work on graphics projects, but if your eyesight isn’t great, this could still be too small of a size.

Video editors will also need an efficient cooling system since they are going to put their machine through its paces while rendering the clips.

This is one of the most affordable models currently on the market, but it still offers a lot! It’s powerful enough to handle rendering videos and playing demanding games with ease while also sporting an impressive display. The battery life leaves something to be desired if you’re going for long periods without charging.

This gaming laptop has been updated recently. It now features Intel’s latest i77700HQ quad-core processor and NVIDIA GeForce GTX 1070 graphics card, which handles video editing tasks with ease thanks to their power. Its shortcomings include poor battery life and heating issues when under heavy load; since workstations will usually cost more than gaming laptops, this may be a good option for those who want the best of both worlds and can afford to spend a little bit extra.

This is one of the most versatile models on the market thanks to its powerful processor, graphics card, and impressive display. It also has an excellent battery life which makes it great for long periods without charging! The high price point might turn some people away: You’ll have to decide if it’s worth taking out your wallet to get all these benefits.

Adobe Premiere Pro CC is a good option for video editors, and it’s recommended that you use this software because of the low CPU usage. It also has one of the most intuitive interfaces out there! You’ll need to make sure your gaming laptop has at least 16GB DDR4 memory for it to work since this type of program can be very demanding when rendering longer clips which means they might not finish without enough power.

Sony Vegas Pro and DaVinci Resolve (which offers users both high-quality visuals and fast processing) are other options worth considering when finding software for video editing. They’re also very intuitive in terms of usage, so if you don’t want to spend hours reading tutorials, this is a good way to go.

Are Gaming Laptops Good For Adobe After Effects?

Adobe can be run on gaming laptops; however, you might need a more powerful gaming laptop for rendering in 4K. For optimal performance make sure the laptop has at least 16GB RAM and 2GB of VRAM. 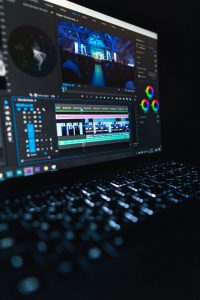 What Specs Does A Gaming Laptop Need For Editing?

You’ll want a laptop with an efficient cooling system and plenty of RAM since rendering videos can be very demanding. It also helps to have a powerful processor for handling graphics as well as enough storage space.

Why Does Video Editing Require So Much RAM?

When the video editing software renders the clips, calculations need to be made for each pixel on each frame. For example, if you render a video at 60fps, a minute of video has 3600 frames that need to be rendered. This will require tons of RAM.

16GB DDR memory or close to is a must! You’ll want to make sure the laptop isn’t prone to overheating as well.

Is Intel or AMD Better For Video Editing?

Intel is generally the better choice because it has a more efficient architecture compared to AMD; this means that it can do things faster and uses less power, which are both great assets for video editors. 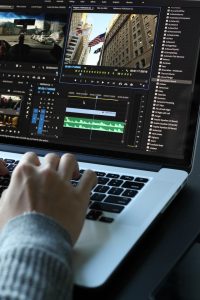 Does Video Editing Use More CPU Than GPU?

Yes, the CPU is the most crucial piece for most editing software. However, some exceptions exist, such as the DaVinci Resolve software, which tends to lean on GPU more heavily than CPU.

Gaming is overall more resource extensive as it requires both CPU and GPU simultaneously. Video editing is definitely one of the most stress-intensive tasks you can perform on your computer, but it’s more reliant on the CPU than the GPU.

Gaming notebooks are constantly evolving thanks to some new innovations from various manufacturers. New models come out all the time, so it pays off to stay tuned for the latest developments and see what’s out there.

You may not be able to get all your tasks done on one machine, but gaming laptops are a great option if you want something powerful enough to edit videos while still being capable of handling games!